It is not unusual for a new cast iron skillet to have a black coating because it is seasoned with oil after production. This black coating prevents the skillet from rusting so it does not need to be cleaned. However, if the black stuff is a result of overheated oil or burnt food, then it is important to learn how to clean black residue off cast iron skillet.

So, in this article, we will cover the various methods of cleaning black residue off your skillet. Also, we shall go the extra mile to explain how you can prevent the residue from forming on the skillet.

What is the black coating on cast iron skillet?

It is important to note that there is a difference between a black coating and a black residue on a skillet.

A cast-iron skillet is usually silver or grey when it’s not treated.

In order to prevent it from rusting, it is seasoned by the manufacture by applying a thin layer of polymerized oil. This gives it a black coating.

The coating also makes the skillet non-stick so that food doesn’t burn easily while cooking.

The black coating may come off after frequent use but you can always reseason the pan using any type of vegetable oil.

What causes the black residue on cast iron skillet?

The black residue on the skillet might be caused by either of the following:

Certain oils like olive oil, walnut oil, and flaxseed oil have a low smoke point; hence they should not be overheated.

In case such oils overheat, they tend to form carbon, which results in black residue deposits on the skillet.

2. Food sticking on the pan while cooking

The reason for sticking could be a failure to use oil cooking. Foods rich in carbohydrates and proteins also tend to stick on the pan easily when subjected to high heat. Thus, you need to use enough cooking oil or butter when cooking and avoid high heat.

Food is likely to stick on the pan if it is not seasoned and causes a black residue.

Seasoning as earlier mentioned creates a protective layer on the pan that acts as a buffer thereby prevent food from sticking.

See also: Reasons why cast iron is sticky after seasoning

No, the black residue is not harmful because it is caused by carbon deposits that are produced due to the overheating of oil or burnt food.

Although it is not harmful, nobody would enjoy eating food that has black specs of carbon deposits. That is why it is important to thoroughly clean the skillet to remove the residue.

So let’s see how you should clean the skillet to remove the residue and prevent it from re-occurring.

How to clean black residue off cast iron skillet

It doesn’t matter what is the cause of black residue on you cast iron skillet but you need to get rid of it.

Here are some ways you can clean it off and leave the skillet looking as good as new.

Method 1: Use salt or baking soda and soap

Salt and baking soda are household items so they are readily available.

You can use either of them to remove the black residue.

Method 2: Use a self-cleaning oven

There is no doubt that using a self-cleaning oven to clean the skillet is less tedious and will leave behind a sparkling skillet.

The oven simply uses high temperatures to clean layers of oil and food stuck inside the oven. So it can be used to clean a cast-iron skillet as well.

If you have a self-cleaning oven, the process is quite simple.

It is important to note that this method is risky because the self- cleaning oven gets extremely hot and it’s possible to crack your cast iron especially if it’s older. If you have to use the oven method, consider doing it less often.

Method 3: Clean with Vinegar and water

Vinegar is also a readily available household product. It can be used to remove chad on a skillet as well as remove rust.

If you choose to use this method, you need to have white vinegar. Alternatively, you can simply put water and vinegar into the skillet and let it soak rather than submerging it in the sink. Then scrub and rinse in hot water.

Keep in mind that vinegar is acidic. So you should not let your cast iron pan soak in to for too long as it may cause corrosion.

Method 4: Boil water in the skillet and use a spatula

Compared with the above methods, this is the simplest one. This will however work best if the black residue is due to burnt food rather than oil.

How to prevent black residue on cast iron skillet

As earlier mentioned, oils that have a low smoke point should not be overheated since they will burn and form a black layer on the pan.

The low smoke point means the temperature at which they start to smoke and burn.

Most unrefined oils like flaxseed, canola, olive, and wheat germ oil have a low smoke point. So, you should be careful not to overheat heat or use them only in dressings.

2. Always wipe down the skillet with oil immediately you realize the food is burning

No one burns their food intentionally when cooking.

So in case you accidentally burn the food, put it in a different pan, and then clean off the burnt food.

Do not let it dry on the skillet as it may be hard to clean later. 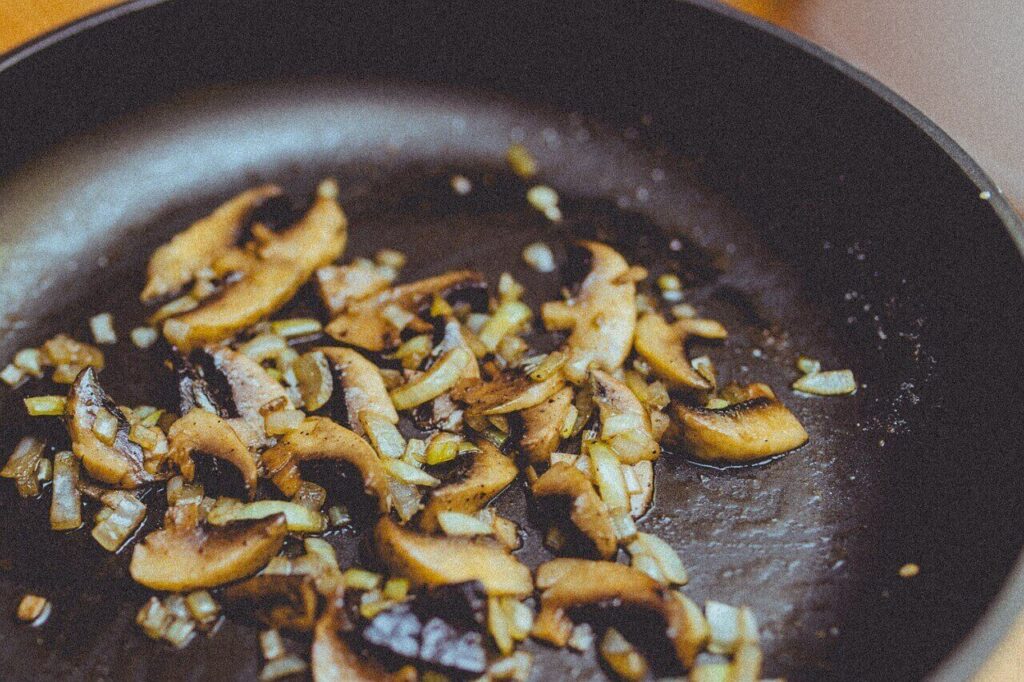 The easiest way to clean is by wiping the skillet with oil and the food residue will come right off.

3. Apply oil to the skillet every time after cleaning

The process of applying oil on the skillet after cleaning is known as seasoning.

Once you thoroughly clean your skillet and ensured it is completely dry, the final step is always to season it with oil such as vegetable oil or shortening.

Just pour a little oil inside the skillet and use a paper towel to spread it so that it forms a thin layer of oil.

Heat it in the oven for about 1 hour and then let it cool.

Seasoning restores the black coating that protects the skillet from rusting. It also helps to prevent food and oil from burning and forming the black residue.

See also: How to get rid of white film on dishes in the dishwasher

The above methods of how to clean black residue off cast iron skillet are very simple and doable.

They can save you the pain of buying another skillet, which is quite costly.

There are a few things you need to remember when cleaning a cast-iron skillet. Always wear gloves because the skillet holds heat for a long time, and it can burn you several minutes after removing it from the oven.

Also, never put a cold skillet in a hot oven even when seasoning because a sudden change in temperature can cause the skillet to crack.